I made a commitment to try and read one book by an African author every week for the next year. Why? Why not? I read a lot, and I’ve spent a great deal of time reading books from other parts of the world, so why not read African books. this is only week one, so the fervour may die out once the heat of exams hits, but I’m willing to take that chance, and buy myself some time by front-loading a lot of the reading. 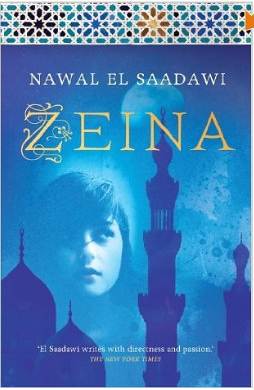 “A woman novelist […] doesn’t taste happiness. And if she does, happiness will come from within her, from her writings. A woman novelist has no country, family, religion, native city, or tribe. Her homeland is the street the open road without our walls. Her life is a journey into the unknown.”

First up, Zeina, by Nawal el-Saadawi. I have to confess, it took me a minute to get into this one, but once I got in to el-Saadawi’s thought processes and rhythms, I loved it.Really and truly loved it. The content is a little difficult to come to grips with. It’s often unclear which of the characters are real and which ones are projections of other character’s psyches’ but broadly speaking, the central character, Bodour is a female literary critic trapped in an unhappy marriage, with a dark secret from her past related to the title character, Zeina.

For me, the real strength of this book is in the style. El-Saadawi crafts a beautiful, ethereal story that shifts effortlessly across time, space and realities, and if you allow yourself to go along for the ride, you find yourself really wondering what is “true” and what is not. It’s also a feminist text – there’s a lot of strong criticism of institutionalised patriarchy, whether by the state or by religion, and of the false moral superiority of the men who often run these institutions. The book really captures the fluidity and the emptiness of public personas and the progressive rot that comes from suppressing one – and mostly women’s – personalities. There are no saints in this text  – except maybe for the titular character, although she’s hardly the virginal, pure image of sainthood that we’re accustomed to expecting. Everyone comes with a significant amount of baggage and everyone has a lot of justified anger towards the rotting system and their own internal demons.

I’m not going to lie – it’s a difficult book in the sense that it deals with a lot of complex and painful themes in an unapologetic and uncompromising way. It’s not the kind of book you want to take on your summer holiday, but it’s definitely worth picking up if you love the lyricism of good writing, and if you want an insight into some of the hypocrisies of the many societies we live in.

I give this book five stars, because I read mostly for style, and the craft here is outstanding (hat tip to the translator Amira Nowaira).